For several years, I’ve been collecting examples that illustrate a general principle about incentives and the dynamics of policy: To create the incentives for better outcomes, rely on small stakes because they support good measurement. In short, SS=>GM.

In other posts, I’ll cite some recent examples that include a new US policy toward investment in Myanmar, the quiet success of National Assessment of Educational Progress, the retreat from using standardized tests to evaluate teachers, and use of stoplight cameras as a source of revenue for local government. But to illustrate the general principle, the best example is managing crime.

In the now standard version of the economic analysis of crime, the key variables are the probability P that someone who commits a crime will be caught and punished and the cost C of the punishment suffered by someone who is caught. This analysis typically assumes that policy makers are free to select any combination of values for P and C and that in deterring crime, the main thing that matters is the product P x C.

The evidence suggest two problems with this analysis. First, holding P x C constant, crime is more effectively deterred when lower stakes, in the sense of a smaller value for C, are combined with the higher probability P of being caught. Second, high levels of C tend to cause low levels of P.

Mark Kleiman’s account of a change in the treatment of probationers is one dramatic illustration of the power of the SS=>GM strategy. In Hawaii, judges and probation officers thought that their only option when a felony probationer failed a drug test or missed a required meeting was to revoke probation. This would send the offender to prison for terms that ranged from 5 to 20 years. It was impossible to impose such draconian penalties in the face of the large numbers of parole violations, so parole officers and judges looked the other way and intentionally “failed” to catch most violations. That is, they deliberately lowered P because the law seemed to force an impossibly high C.

Judge Steven Alm decided that he could “modify” probation by sending someone who broke the rules to jail for a couple of days. He then streamlined the judicial process so that these short jail stays, often served over a weekend, could be imposed within days of a violation. When only a couple of days of jail were at stake, the system could tolerate much less of the usual process that intervenes between a violation and a punishment.

Once he had reduced C by a factor of somewhere between 100 and 1000, he could then increase P. He instituted a system of frequent randomized drug tests. Once again, these tests were accepted in part because the stakes were low. He also instructed parole officers to bring every parolee who missed a required meeting to court.

The parole officers and jailers opposed these changes because they thought they could never handle the huge caseload that would be implied by the large number of violations that they observed (and overlooked) under the existing system. Yet with the new system, the number of violations fell dramatically and could easily be handled. The most striking finding of the experiments that Kleiman then conducted to evaluate the program was that a cost C of 2 days in jail was about as effective in ensuring compliance as a much larger C of 6 weeks in jail.

The usual justification for high penalties C runs like this. Because it is so difficult to catch criminals, raising P is too expensive, perhaps even impossible. The experience in Hawaii suggests is this gets things exactly backwards. If we allow low values of C, it turns out to be much easier than we expect to increase P. Together, small stakes and good measurement can yield lower crime without imposing the huge financial and human costs of a system that imprisons a large fraction of the population. 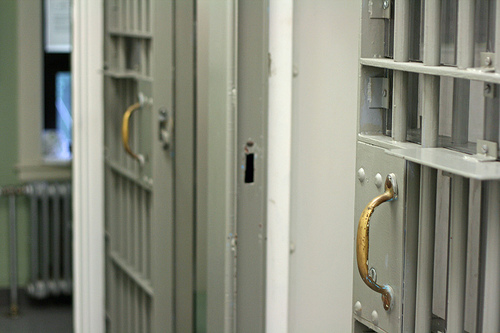