Is the central business district (CBD) still necessary? That is the question Alain Bertaud recently raised in one of the Urbanization Project’s brown bag discussions.

Alain made a couple of important observations about CBDs:

First: Though the job densities of CBDs remain very high, the proportion of all metropolitan jobs located within CBDs has been falling (see, for example, the chart of job and population growth for Seoul). As a result, more and more commuting trips take place between destinations located outside of the CBD. Radial transit systems that funnel commuters to or through the center city are ill-suited for promoting mobility, and metropolitan areas are characterized by the increasing dispersal of jobs and residences. New transit systems should reflect the evolving spatial structures of cities — for example, a grid of fixed rapid rail with shared fleets of individual vehicles for last-mile commuting. 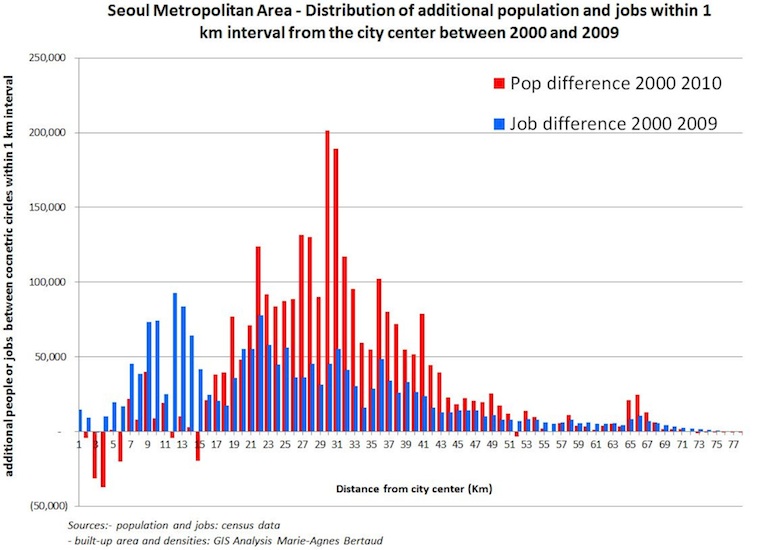 Second: It’s possible that legacy transit systems will serve to maintain the value of land underlying CBDs, even as the function of the CBD itself evolves. “Consumer cities” might involve CBDs with less office space, more high end retail space, more cultural amenities such as museums and theaters, and more up-market high rise housing. The attraction of the CBD in this case would be more leisure and lifestyle than job concentration. Bertaud notes that “consumer city” CBDs are highly unlikely to be sources of innovation because rents will be too high for startups. One way to mitigate the extent to which “consumer city” CBDs become exclusive enclaves for the very rich would be to relax zoning restrictions to allow for additional housing construction, including micro-units.

Here is the slide deck that accompanied Alain’s comments.