On August 28 the Lincoln Institute of Land Policy will publish Planet of Cities. This post is a modified excerpt from the third chapter — The Sustainable Densities Proposition.

Today, too small a share of the American population lives at urban densities that can sustain public transport. The country now produces an inordinate share of global CO2 emissions, a share that clearly needs to be reduced to a more reasonable level that is at least on par with countries with similar per capita incomes. Higher urban densities may contribute to attaining that goal.

Though densification is potentially important for the U.S., the densification agenda should be firmly rejected for most of the growing cities of the developing world. There, many cities already have very high densities and need to be decongested. Even as densities decline in many of these cities, they will remain high enough to support public transport in coming decades.

We should not forget that at the height of the Industrial Revolution and up to the beginning of the twentieth century, there were genuine concerns that urban densities in the U.S. were too high and needed to be reduced to give people more living space, more light, and more air. The tenements of New york City’s Tenth Ward, for example, often contained 20 or more 30-square-meter apartments with no indoor plumbing on a 7.5 x 30 meter lot. Each apartment contained a household of 3 to 14 persons (Dolkart 2007). Many of these units were used as a workplace as well as a residence. Politicians, reformers, and scholars were seriously concerned with living conditions in the city’s crowded neighborhoods.

The Tenth Ward has a population at the rate of 185,513 to the square mile [708 persons per hectare] the Seventeenth 170,006 [657 persons per hectare] and so on with others equally overcrowded. Portions of particular wards are even in worse condition. (New York Times, 3 December 1876)

Jacob Riis, a reformer, journalist, and photographer credited with exposing the overcrowding and dire living conditions in the city’s tenements, was quite pessimistic in his book, How the Other Half Lives, about the prospects of reducing overcrowding and high densities.

What then are the bold facts with which we have to deal in New York? 1. That we have a tremendous, ever swelling crowd of wage-earners which it is our business to house decently. 2. That it is not housed decently.  3. That it must be so housed here for the present, and for a long time to come, all schemes of suburban relief being at yet utopian, impracticable.

Riis was wrong. Other social reformers sought to reduce overcrowding through decongestion policies made possible by the development of new transportation technologies from the early nineteenth century onward. These technologies reduced the cost of movement in cities and made it possible for large numbers of people to commute over greater distances. Adna Farrin Weber in his influential The Growth of Cities in the Nineteenth Century had it right: “The ‘rise of the suburbs’ it is, which furnishes the solid basis of a hope that the evils of city life, so far as they result from overcrowding, may be in large part removed.”

There is no question that suburbanization both facilitated and accelerated the decongestion of Manhattan’s overcrowded neighborhoods.

The figure above shows census tract densities in Manhattan in 1910 and 2010. The column height displays densities in persons per hectare, not building heights, since buildings in 2010 were much higher, on average, than those of 1910, but they housed fewer people in smaller families that consumed much greater amounts of living space per person. As the figure clearly demonstrates, the high densities throughout the island and in the Lower East Side in particular were greatly reduced and overcrowding was largely alleviated as vast numbers of residents left Manhattan for the suburbs. 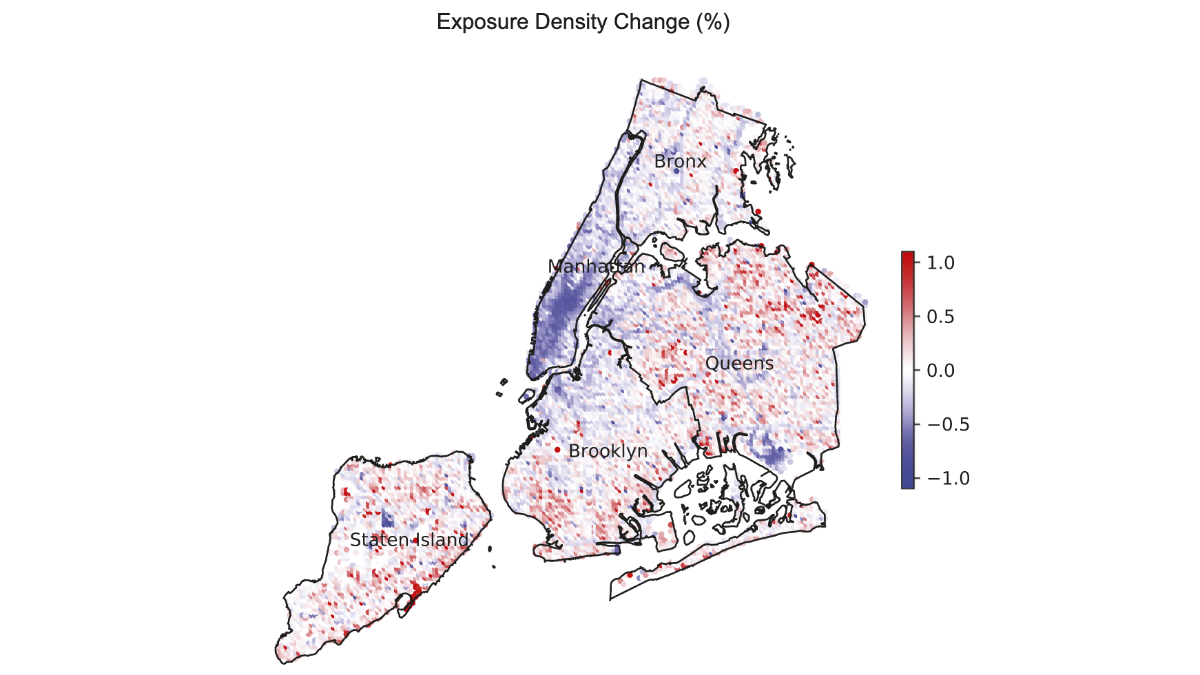